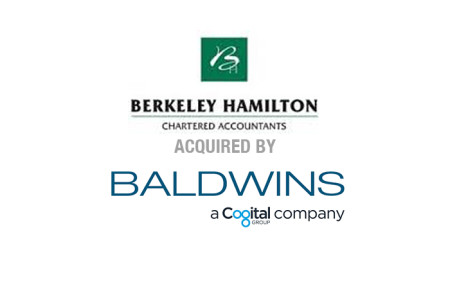 Midlands-based Baldwins Accountants acquired Gloucester firm Berkeley Hamilton, continuing its expansion strategy as part of a buy and build strategy. Baldwins Accountants, which was set-up in 1971 and is led by father and son John and David Baldwin, has multiple offices across England and Wales. It recently formed part of the Cogital group after being acquired by Hg Capital

Berkeley Hamilton was rebranded as Baldwin Berkeley Hamilton. All 25 staff and the existing partners remained with the company, which acts for over 700 corporate and private clients ranging from SMEs to global entities.

David Baldwin, a partner at Baldwins Accountants, said: ‘Berkeley Hamilton is a well-established, large accountancy and business advice practice in Gloucester and we want to build on its experience, reputation and the excellent service it already provides to its clients. We will bring our significant expertise to complement the existing services offered to clients. This is the first time we have had a base in the city and is considered a significant addition to our group.’

Mark Handscombe, a partner at Berkeley Hamilton, said the alliance represented a new chapter in the business, which has been established since 1982.

‘We have built a strong team over the years particularly within our outsourced payroll company, PayeStaff Limited, which is going from strength to strength due to the professional, tailored, accurate and efficient secure service it provides.

Baldwins Accountants’ expert knowledge in certain sectors will complement the services we already provide which can only prove beneficial to our clients,’ Handscombe said.